CONTINUING TO CONNECT CITIES FOR WORK, ENTERTAINMENT AND LEISURE

On December 30, 1996, Trinity Railway Express began its inaugural service with a 10-mile segment linking from Dallas Union Station to the Downtown Irving Transit Center, making it the first commuter rail line in the state of Texas. More than 4,000 people rode the train during its first day of operation. The TRE celebrated its one-millionth customer on March 12, 1999 and, on October 12, 2011, its 25-millionth rider.

Since that first day in 1996, the TRE opened six additional stations, expanding service to Fort Worth – connecting employees to employers, fans to athletic events, and friends and families to one another.

For nearly two years now, the world has dealt with the deadly COVID virus.  We at Trinity Railway Express want to extend our appreciation to our customers for continuing to entrust us with your commute during these difficult times.

We are proud to provide this essential service to our region and look forward to doing so for the next 25 years and beyond! 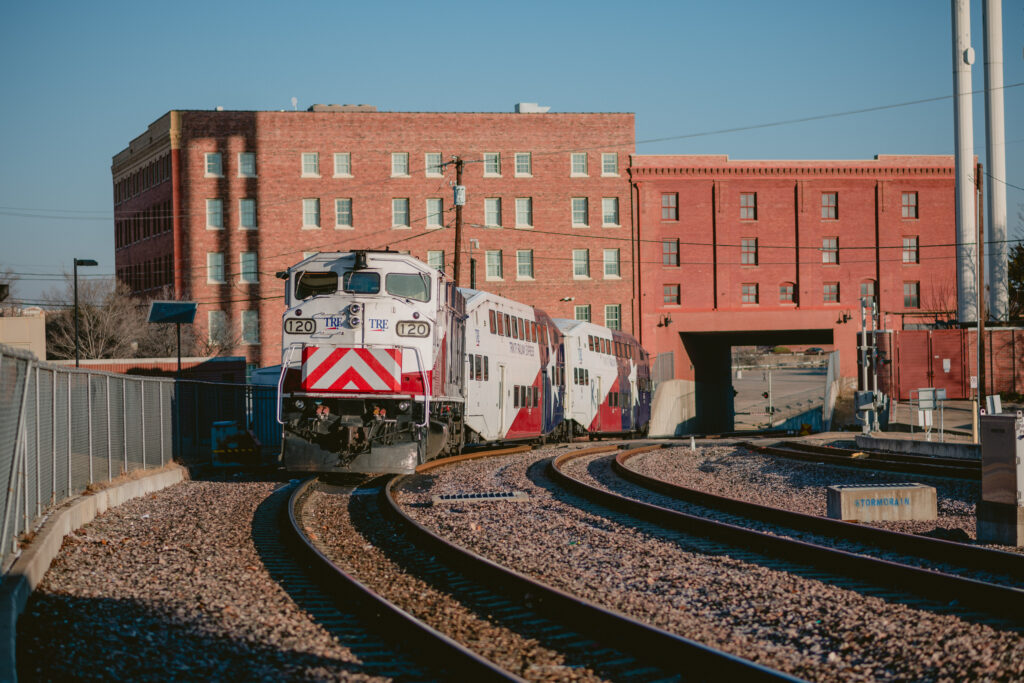 THE PEOPLE WHO KEEP THE TRE ON TRACK

Every time you have a safe, reliable trip on the TRE, a lot of people behind the scenes made it happen. In fact, operating and maintaining the TRE involves no fewer than seven departments – plus the coordination of DART, Trinity Metro, and various government agencies. Most of the operations and maintenance are overseen by our contractor, Herzog, which is an industry leader in the train business – both freight and passenger.

Check out the duties and responsibilities of these seven departments, and afterward we’ll share some fun facts.

Just like it sounds, this is the part of our organization that keeps the trains moving. They coordinate with freight carriers, oversee dispatch operations, and make sure the TRE meets federal regulations.  This is also the group that manages service disruptions when they occur, which involves communicating with other agencies and the riding public, and restoring service as quickly as possible.

This group inspects and maintains every train you board. They’re responsible for keeping vehicles, shop equipment, and the facility itself in a state of good repair.

The right of way – simply called “ROW” in the industry – consists of the tracks and supporting infrastructure, plus structures and bridges. The ROW team regularly inspects these to make sure they’re in tip-top shape, and also meet all regulatory guidelines.

Signaling systems are key to the smooth operation of any railroad. This team maintains, inspects and manages all signals, control points, radios and base stations – plus grade-crossing protections, such as crossing signals and gates. The team also oversees our dispatch system and communications equipment.

Positive train control (PTC) is a type of train protection system that prevents collisions and derailments. The Positive Train Control team tests, documents, configures, maintains and inspects the PTC system – which includes hardware and software in the office, along the ROW, and on the trains themselves.

The TRE is subject to safety regulations from a host of agencies: the Federal Railroad Administration, the Environmental Protection Agency, the Texas Commission on Environmental Quality, the Texas Department of Transportation, and more. The Safety team makes sure that the TRE complies with all of these, and is also responsible for the safety of all our day-to-day operations and maintenance activities.

Environmental Compliance makes sure that the TRE complies with all environmental regulations at our maintenance facilities, as well as along the rail ROW. This is the group that would be responsible for timely response in the event of an environmental emergency.

The safety of TRE riders and employees remains a top priority, so we are modifying procedures to reduce the risk of exposure to COVID-19. - Read more

Get updates to TRE service, schedules, delays and event info sent to your mobile device or email!